Film will premiere above @7 pm. You can also watch directly on YouTube Live.

Thank you to our sponsors:

A Virtual Event where you can celebrate from the comfort of your home.

The Independence Soiree* will be a spectacular, virtual fundraising event that takes everything you love about Independence National Historical Park and streams it to you at your home.

During the Soirée, join Independence Historical Trust and Independence Visitor Center Corporation as we provide an overview of all things we love about Philadelphia.

Proceeds from this fundraising event will support the operations of Independence Historical Trust and Independence Visitor Center Corporation, two organizations dedicated to welcoming visitors to the City of Philadelphia and providing a world class experience.

This year marks the 100th anniversary of the adoption of the 19th Amendment. We will commemorate this momentous event by recognizing and celebrating the women who marched, protested and voted  to try to make our country a better nation. This is the year to celebrate all women.

We hope you will join us virtually this September!

*Soirée is defined as an evening party or gathering, typically in a private house, for conversation or music. While we won’t be gathering at Independence Hall like in years past, we want everyone to have a fun, festive time at home.

Company recognized outside of the event by:

Company recognized outside of the event by:

Company recognized before the event by:

Company recognized before the event by:

** Logos must be sent to Independence Historical Trust by Friday, August 21 to be included in the invitation.

Supporters will be recognized with a listing of their name in the following:

To talk to a staff member about becoming a sponsor,

To mail a check in, please make it payable to the Independence Visitor Center Corporation and mail it to:

Thank you to the support of our committee members 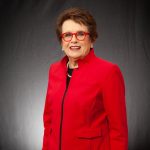 Billie Jean King is the founder of the Billie Jean King Leadership Initiative. She has long been a champion for social change and equality. King created new inroads for all genders in sports and beyond during her legendary career and she continues to make her mark today.

King was named one of the ‘100 Most Important Americans of the 20th Century’ by Life Magazine and, in 2009, in recognition of her work as a social justice pioneer and her accomplishments in sports, President Obama awarded her with the Presidential Medal of Freedom, the nation’s highest civilian honor.

King grew up playing tennis in the California public parks and won 39 Grand Slam titles during her career. She helped form the Virginia Slims Series and founded the Women’s Tennis Association. She defeated Bobby Riggs in one of the greatest moments in sports history – the Battle of the Sexes on Sept. 20, 1973.

In 2017, Fox Searchlight released the critically acclaimed film, Battle of the Sexes,starring Academy Award® winner Emma Stone as King and Academy Award® nominee Steve Carrell as Bobby Riggs, which depicts both players’ battles on and off the court as well as the cultural and social impact of the groundbreaking match.

In 1974 King co-founded World Team Tennis, the revolutionary professional team tennis league. That same year she also founded the Women’s Sports Foundation. In August 2006, the National Tennis Center, home of the US Open, was renamed the USTA Billie Jean King National Tennis Center in honor of her accomplishments on and off the court. In 2014 President Obama named King to the Presidential Delegation for the Winter Olympics in Sochi, Russia. In 2018 King received a Lifetime Achievement Award as part of the prestigious BBC Sports Personality of the Year Awards. In 2019 ESPN established the Billie Jean King Youth Leadership Award, which is presented annually at the network’s Sports Humanitarian Awards ceremony. King serves on the board of the Women’s Sports Foundation, is an adidas Global Ambassador and is a past member of the board of the Elton John AIDS Foundation and a past member of the President’s Council on Fitness, Sports and Nutrition. 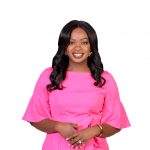 Aunyea Lachelle is a lifestyle & entertainment reporter for NBC10 Philadelphia. You can watch her reports weekdays on Philly Live at 11:45 a.m.

“Having been born and raised here, I know this area is bursting with entertainment! There’s so much to do and see, from music and food to sports and events, we’ve got it all,” said Aunyea.

Aunyea joined NBC10 in July 2019 and enjoys showing viewers the amazing, hidden gems our region has to offer. During her time at NBC10, she has covered a variety of subjects, from highlighting local businesses and owners during the Coronavirus pandemic, to interviewing sports legend Billie Jean King, and Philly’s own music legend Patti Labelle. Aunyea enjoys highlighting the work of local non-profits and community groups who she believes are the true champions of the city.

Prior to joining NBC10, Aunyea worked as a community affairs coordinator, programming producer and digital reporter at WPVI.

A native of Northeast Philadelphia, Aunyea holds a bachelor’s degree in Communication Studies from West Chester University. She is a proud member of the Delta Sigma Theta Sorority and is passionate about women’s rights, equality, and access to education.

When she is not reporting, Aunyea enjoys spending time with family and friends, keeping up with the latest celebrity news and trending topics, listening to music and even writing her own songs every now and then.

The History of the Justice Bell

The Independence Soiree will be hosted on the 100th Anniversary of the day that the Justice Bell or also known as the Woman’s Liberty Bell, rang for the first time.

Commissioned in 1915, the bell was created to be a replica of the Liberty Bell and promote the cause of women’s suffrage in the United States.  Funded by suffragette Katherine Wentworth Ruschenberger, the bell traveled on the back of a flat bed truck to all 67 counties of Pennsylvania to rally the cry for the woman’s right to vote.

The bell’s clapper was purposefully chained to the side so it could not ring. This represented women across the nation who were silenced by being denied the right vote. In 1920, the Justice Bell traveled to other states in support of,  and to raise awareness of, the 19th Amendment which would give women the right to vote.

On August 26, 1920, the 19th Amendment was adopted and certified by Congress.  In celebration, a month later on September 25, 1920, the Justice Bell was brought to Independence Hall.  There the clapper was unchained and the bell rang out for the first time to symbolized that the voices of women were no longer silenced.

The adoption of the 19th Amendment was the first step towards equality between men and women but there would still be many battles yet to come. While white woman of the time enjoyed the benefits of voting, it would be many, many years before minority woman would be able to freely vote. As a matter of fact, it wasn’t until the passing of the Voting Rights Act of 1965 when all people, no matter their race or gender would be allowed the right to vote in the elections of the United States.

After the ringing of the Justice Bell on September 25, 1920, the bell was placed the grounds of (what would become) Valley Forge National Park.  Mrs. Ruschenberger left the bell in her will to the Valley Forge Memorial Chapel.  To this day, the bell resides at the chapel.

For more information on the Justice Bell and the Chapel, please visit: justicebell2020.org

Dan King is a Philadelphia-based creative director and cinematographer who produces original digital films for large format installations and the web.  Through his experience in music videos and environmental portraiture, Dan has developed an engaging style that is perfectly suited for mission-driven and cultural organizations.